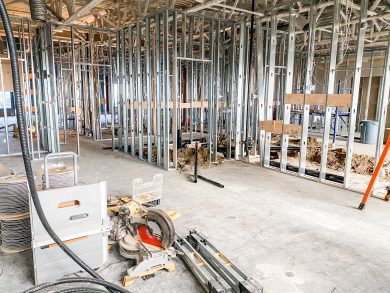 While pregnant with their first child, Alicia and Randall started discussing their plan for childcare and made a list of all the things that they wanted:

After an extensive search, they found a shortfall in exceptional quality childcare which met this criteria; this gave birth to the idea of simply doing themselves. So Alicia and Randall decided to marry their two areas of expertise (teaching and business respectively) to create Tot Spot Academy.

Tot Spot Academy started out of Randall and Alicia’s home in January 2013 as a dayhome with only one client. Within a year, it had quickly grown into a thriving business serving multiple families, hired 1 full time employee, and had a 2.5 year waiting list.

Even though Tot Spot would be considered a smashing success as a day home, it has one major problem: capacity. Due to extensive demand, Tot Spot Academy had reached a stage where growth was necessary. The next step was to transform the day home into a daycare capable of serving far more families.

After a lengthy search, the perfect location for Tot Spot Academy was found within St. Albert. Alicia and Randall took possession of a commercial space (9420 McKenney Ave) in June of 2016 and renovations took place over the summer transforming a former scrapbooking store into the daycare it is today. Construction and licensing were completed as the end of summer neared and Tot Spot Academy the daycare officially opened its doors September 12th, 2016.

A place that offers developmental and educational programming, but also realized the importance of play, stimulating children’s curiosity, and fun

A clean and bright facility that promoted fitness, nutrition, and environmental awareness

Within months, the Tot Spot Academy again faced the same capacity problems as the dayhome. Word travelled fast about the quality of care, the new spots quickly filled up, and once again Randall and Alicia had to search for a new space. A gym in the same strip mall had just closed its doors and offered the perfect place for expansion. The decision was made to move the preschool and out of school care kids into that space and we called it Tot Spot 2. Randall and Alicia learned a lot of lessons throughout building the first center (Tot Spot 1) and applied those learnings to the design of the new space. The doors finally opened to Tot Spot 2 on November 10th, 2017.

After adjusting to operating in the two spaces for a year, it became apparent that a second (and hopefully final!) expansion was required. The daycare was full, parents were happy, and applications kept pouring in. With the goal of expanding TotSpot 2 to serve all the daycare needs and using the original space for out-of-school care, Randall and Alicia patiently waited until the space beside Tot Spot 2 opened up. In 2020, the opportunity finally arrived! A financial organization and clothing store moved out and a large adjacent area became available. Construction began in September 2020 to expand Tot Spot 2 into this space so all the children, from babies to preschool, could all be in the same center and benefit from the design improvements such as windows for each classroom.

Construction is planned to be completed December 2020 and the doors to the new space should open in January 2021. Out of school care will then be moved into the original space which will also go under renovation to be best suited for our older kids.

We are thankful to work with an amazing group of dedicated, educated, loving teachers every day. Without them, none of this would have been possible. Together we strive to make Tot Spot Academy the best childcare choice in St. Albert.

Tot Spot Academy is more than just a daycare, it is a fabulous group of families that have created a wonderful community of little learners.